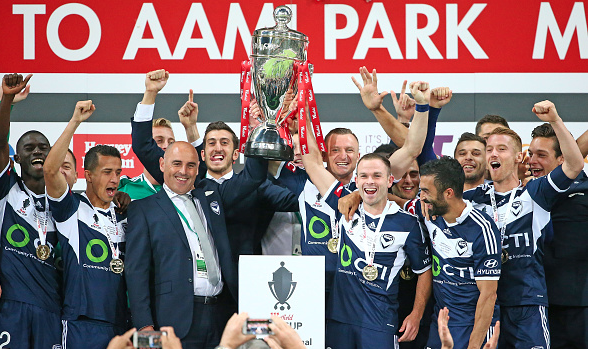 When they are in the mood – especially in big matches – there is little in the A-League that can match this current iteration of Melbourne Victory.

Kevin Muscat has fashioned a team that is quick, skilful and relentless in attack. Composed, creative and hard when they need to be in midfield. And tough and consistent at the back.

And that is why they have now collected their third title in six months after beating Perth Glory in the FFA Cup final at AAMI Park on Saturday night.

Victory overwhelmed the West Australians in the first half to take a match-deciding two goal lead with a display of pace, power, precision and passion that Kenny Lowe's team simply could not match.

Muscat's men tired towards the end as Glory mounted a spirited second-half challenge,   but  despite having captain Carl Valeri sent off five minutes from time Victory  held on to their 2-0 lead, with goals from Oliver Bozanic and Besart Berisha, to take the cup for the first time in  the competition's second season.

Victory are now the first A-League team to have won the premiership and championship as well as the FFA Cup in the same year.