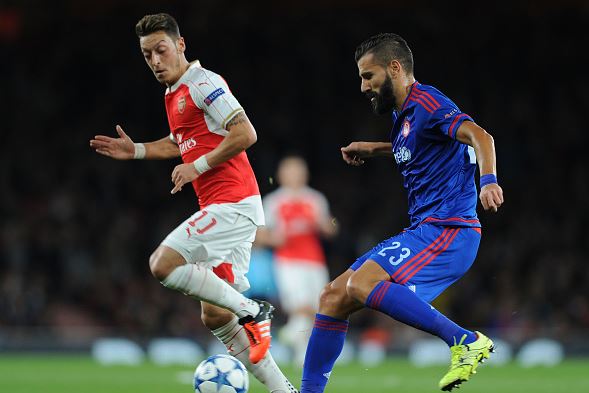 Meanwhile, Barcelona managed a come from behind win over Bayer Leverkusen thanks to Luis Suarez, depsite the absence of star payer Lionel Messi.

Arsenal now look unlikely to qualify for the knockout stages of the Champions League, sitting bottom of the group with two losses from two games, after suffering a 3-2 loss to Olympiakos at the Emirates.

Olympiakos scored first through Felipe Pardo, before Theo Walcott scored his second goal in as many matches to level the scores.

However, Arsenal fell behind again just five minutes later, with Arsene Wegner's decision to select David Ospina in goals over Petre Cech proved costly, with Ospina letting a routine catch to slip through his hands, resulting in a diabolical own goal.

Alexis Sanchez managed to level the scores early in the second half, before Iceland striker Alfred Finnbogason capatalised on some poor defending to net the winner just a minute later.

Olympiakos won its first ever match in England, after being beaten in all 12 of their previous visits.

Jose Mourinho's return to former club Porto was not a happy homecoming, with the Portuguese side recording an upset 2-1 win to sit equal top of Group G.

Andre Andre opened the scoring in the 39th minute, before Willian equalised with a sublime free kick.

Maicon then headed home in the 52nd minute to seal the deal, with Chelsea unable to pull back the one goal deficit.

Luis Suarez saved Barcelona's blushes without Lionel Messi, to help Barca to a 2-1 come from behind win over Bayer Leverkusen.

Papadopoulos put Leverkusen in front in front in the 22nd minute and it looked like the away side may just hold on for a memorable win, holding Barca at bay for almost an hour, before Sergi Roberto finished off a saved Luis Suarez shot to level the scores.

Suarez then scored a goal of his own with a brilliant strike from the edge of the area to complete the comeback and send the Spanish giants to the top of Group E.