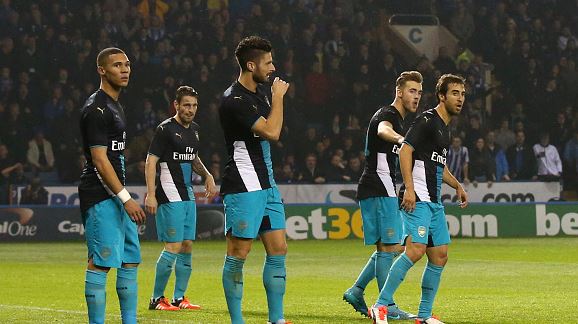 Arsenal were dumped out of the League Cup after a weakened team crashed to a damaging 3-0 defeat at second-tier Sheffield Wednesday in the fourth round on Tuesday.

Ross Wallace put Wednesday ahead after 27 minutes and then teed up Lucas Joao for the hosts’ second goal shortly before half-time, with Sam Hutchinson completing victory early in the second period.

It was Wednesday’s second Premier League scalp in this season’s competition, following their third-round win at Newcastle United, and brought Arsenal’s run of four successive victories to an end.

They lost England pair Alex Oxlade-Chamberlain and Theo Walcott to injury in the early stages of their League Cup fourth-round tie at second-tier Sheffield Wednesday as well.