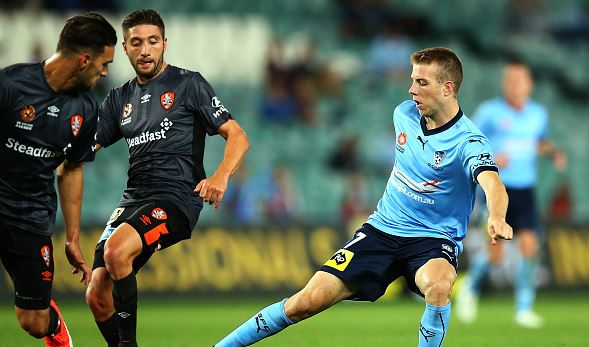 As the Victory and Glory took part in the FFA Cup final, neither will move from their round four position. I will take any movement into consideration when they play their catch up fixture.

Sydney FC, despite competing in one of the most uninspiring games of the season to date, Sydney remain undefeated and atop the rankings, and A-League table. Bad weather combined with two equally matched sides who seemed happy with a point to produce a game that will not feature on too many end of season highlights. Sydney surprisingly did not win the possession stat, but never really looked like they would lose. They managed just the six shots, two on target, but their defence looks like it has found is groove, only allowing five shots from the red hot Roar. Graham Arnold will be very happy with their opening month and a bit.

Brisbane played their role in Friday Night’s contest, however they did not live up to their attacking reputation. They, like Sydney, looked happy with a point, and in all honesty will probably be the happier of the two teams. Despite all of their attacking weapons, they only managed five shot, without a single strike on target. It’s tough to score if you can’t hit the target, but one blank will not worry John Aloisi and his men. They’re likely to see far more space and create more back home next weekend against the Glory.

City managed to bury the demons of last weekend’s result where they let a two goal lead slip and came away without a point. Aaron Mooy, what more can be said about this man. Every week he gets better and better, and his goal to take his side two-nil up over Adelaide certainly will appear in many highlight packages. They did concede two goals, however that’s not too worrying when you hit the back of the net four times yourself. There is a lot to like about this City side, who have probably played better than their ladder position suggests.

As mentioned, due to their FFA Cup commitments, they will not be considered for movement in the A-League based rankings. They will play their round five fixture on the 16th of December.

The Wanderers had to wait for a long time for their win over the Glory. They only had to wait six days for their next win, a 2-1 win over the Jets. A controversial late goal to the Jets looked as though it would end the Wanderers streak on just the one win, but the injection of Brendon Santalab changed the game. He won the penalty to allow Andreu to level the scores, and he created the spark that allowed Mitch Nichols to find space, and the back of the net. Nichols has continued his brilliant start to the season. Dario Vidosic continues to impress. Castelen also made his return to the field via a late substitution.

The Jets probably didn’t deserve to fall three positions, but the results around the dictated the drop. At one-nil with only ten minutes to go, they should have closed the game out, especially given the opportunities they squandered earlier. To concede two late goals, at home, to a Wanderers side with only one win coming into the game, the Jets will be disappointed. David Carney looks a lot like the player he did during his peak at Sydney FC. To think the Jets wanted to move him on late last season looks even more surprising now.

The Phoenix are another who drop due to others playing well, rather than their playing badly. A one-all draw away to the Mariners is not a bad result, but I’m confident in proclaiming they were outplayed by their hosts. They lost all the important stats, including possession, duals won and total passes. They conceded an incredible 15 corners. You could say they did well to only concede one goal.

The Mariners managed to stop the run of losses with their late equaliser against the travelling Phoenix. They probably should have come away with the three points after dominating for large majorities of the contest. To only score one goal from 17 shots and 15 corners is not the best of conversion rates, however unlike the past few weeks, they are creating those chances. They conceded an early goal and spent most of the remainder of the game chasing a point, but on another day they could, and probably should, have come away with three.

As with the Victory, the Glory will not be considered for movement in the A-League based rankings. They will play their round five fixture on the 16th of December.

It may only be the completion of round five, but alarm bells are ringing. United were well outplayed by another visiting side, and conceded four goals on Thursday night. The positive is that they finally found the back of the net through another route other than via an own goal. Cirio’s goal was a well taken moment from the striker, however their second goal came via a fortunate penalty decision. This was yet another case of plenty of opportunities without a polished final product. Their 21 shots was seven more than their opponent, yet they could only manage one goal from open play.