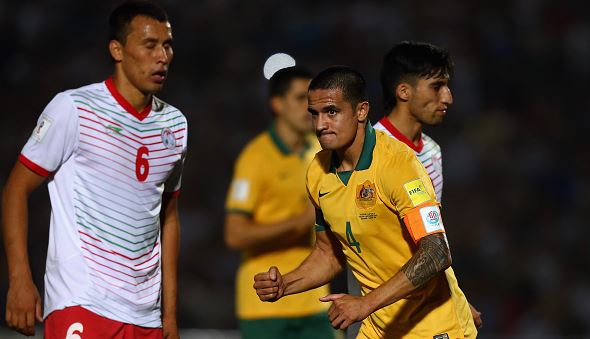 The Socceroos made it three wins from three qualifying matches this campaign, after second half goals from Mark Milligan and Tim Cahill saw Australia stay top of Group B, in front of 19,000 fans at the Republican Central Stadium in Dushanbe.

After a scoreless first half with few chances, former Melbourne Victory captain Mark Milliagn opened the scoring in the 57th minute, after poking home from close range from a corner.

Cahill then doubled the lead 15 minutes from time after finishing off a beautiful piece of play from Nathan Burns and Ryan McGowan on the wing.

Cahill's second and Australia's third came in the 90th minute through a trademark header, thanks to a perfectly weighted cross from Tommy Oar.

Australia's all-time leading goal scorer said after the match that there are definitely more goals to come.

In the other match in Group B over night, Jordan beat Bangladesh 4-0.

Australia's next group is away against Jordan on October 9, before they return home to host Kyrgyzstan in Canberra in November.