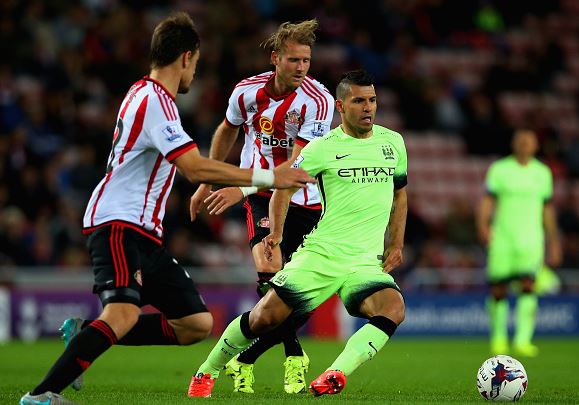 Manchester City have cruised into the fourth round of the Capital One Cup after dispatching of Premier League side Sunderland 4-1 at the Stadium of Light overnight.

Sergio Aguero got things going with a goal in the ninth minute, before both Kevin De Bruyne and Raheem Sterling scored their second goals for the club.

Leicester City and West Ham went to extra-time after Joe Dodoo's goal was cancelled out by Hammers striker Mauro Zarate.

The game stayed deadlocked until the 116th minute, when Leicester striker Andy King popped up with a header to send his side to the fourth round.

It caps a brilliant start to the season for the Foxes who are sitting fourth in the Premier League, two points clear of fifth placed Arsenal.

Everton came from behind to knock Championship side Reading out of the competition with goals from star midfielder Ross Barkley and new signing, Deulofeu.

The Merseysiders were under the pump early, conceding just before half-time thanks to Reading striker Nick Blackman, but were able to stay composed to end the night with a win.

Tottenham vs Arsenal (4:45am AEST)

Liverpool vs Carlisle United (5:00am AEST)