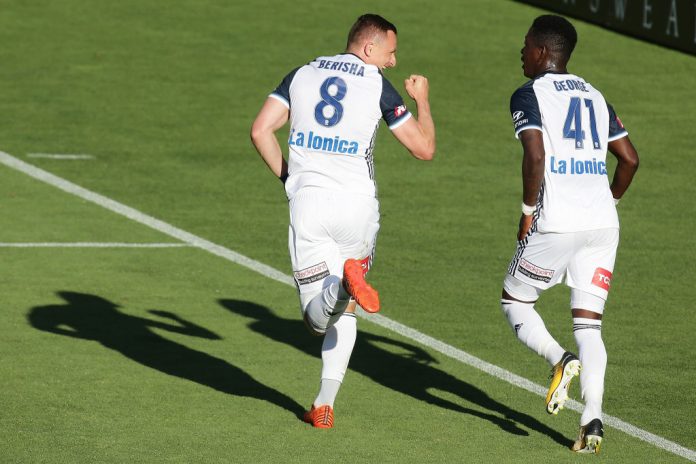 1- Something needs to be done to improve crowd numbers

This season we have seen crowd numbers dwindling. Melbourne Victory are normally the one team we can rely on for large attendances (and yes they still are) but the crowds seen particularly at the Big Blue and the Melbourne Derby were short of expectations.

The league lacks big names and whilst there are players who have played at a high level there aren't many players who attract a crowd, players like your Del Piero's and your Emile Heskey's need to be coming to the league as marquee players in order to get bigger crowds.

Even lifting the number of international players allowed per team would help improve the standard of the league which would encourage more people to attend. Whatever it is, the A-league board must look at it and make changes to prevent the league falling behind.

2- Besart Berisha may have found his rhythm

After opening the scoring in Victory's first win of the season it looks like all Besart Berisha needed was a couple of weeks on the sidelines. Since coming back from a two week suspension, Berisha has found the back of the net in his last two starts and looks hungrier then ever to score.

Melbourne's season hasn't gone to plan but the win on the weekend puts them back into a finals spot and they are going to need Berisha to keep finding the back of the net, especially considering they don't play at home for another two weeks.

3- Roy O'Donovan will be the key to Jets' Success

Whilst the Jets were handed only their first loss of the season at the hands of reigning champions Sydney FC going down 2-1, they were without league leading goal scorer Roy O'Donovan and he was sorely missed. If the Jets want to be of any chance of winning anything this season they are going to need to keep the Irishman who has scored eight goals in just six games this season, fully fit.

Ernie Merrick's side is without marquee signing Ronald Vargas for the rest of the season following his double leg break so its down to O'Donovan to lead from the front in order for the Jets to take something from this season after a brilliant start.

4- Perth Glory are in the pressure cooker

The pressure is building on Perth Glory who have lost their last two games and are in the midst of a crippling injury crisis. Arguably their best player Diego Castro is still set to be out for another two to three weeks, whilst Adam Taggart, Andreu and Scott Neville are also on the sidelines.

If they keep failing to get results we could see manager Kenny Lowe departing. This weekend they face a tough test away to Melbourne City, its going to be a tough ask considering their outs but they are going to need to start performing.

5- Something needs to be done with the A-league pitches

After the weekend's game between Western Sydney and Wellington Phoenix was postponed due to the pitch not being at a safe standard to play on, it has further delayed the Wanderers return to spotless stadium.

It begs the question, are officials taking the league seriously? For a competition in its top flight to have a game called off after minimal bad weather is just not good enough. Either the pitches need extra work so they can be used for designated fixtures or if a game is called off, there needs to be a back-up pitch allocated for use.

The postponement of the fixture mean that Western Sydney haven't played at their home ground for four weeks and they won't return until Mid-February, with the date and whereabouts of the game still to be decided.