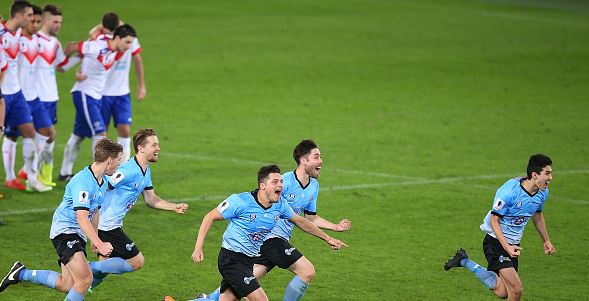 The FFA Cup round of 32 kicked off last night, with four matches being played.

Queensland's Palm Beach Sharks beat Victoria's South Melbourne in a thrilling penalty shootout 8-7, after the two teams were locked at 1-1 after the full time whistle at Cbus Super Stadium on the Gold Coast.

South Melbourne scored first through Milos Lujic in the 34th minute, before Palm Beach equalised just four minutes later. The equaliser came courtesy of a penalty, when South Melbourne goalkeeper Nikola Roganovic brought Rees Duncan down in the area. Florian Matik then stepped up and converted the penalty. Neither side could find a winner in the second half or during half an hour of extra time, with a penalty shootout needed to separate the two teams, with Palm Beach eventually prevailing, 8-7.

The two sides were locked at 1-1 for most of the match after Hume opened the scoring in just the third minute, before Brisbane found the net in the 23rd minute.

However, late drama turned this one into the match of the night. The Brisbane Strikers scored what appeared to be the winner in the 90th minute through Scot Coulson, before Hume City scored directly from the kick off to equalise less than a minute later. It finished 2-2 at full time. The Strikers then took the lead once again in the 13th minute of extra time. But Hume, as they did earlier in the night, instantly, netting the equaliser just three minutes later to make it 3-3.

The winner then came in the 120th minute through an agonising own goal from Brisbane to end a dramatic evening.

Blacktown City scored the opening goal in the 34th minute as they looked to to get the early momentum against their less fancied opponents, taking a 1-0 lead into halftime after a dominant first stanza.

However, they were in for a rude shock in the second half, with MetroStars scoring two goals in the space of 18 minutes late in the match to seal a memorable come from behind win.

Heidelberg's build up was full of drama, after goalkeeper Griffin McMaster was stood down from the match after sending an offensive tweet about Sydney Swans' star Adam Goodes. However, United was able to put the distraction behind them and record an impressive win. Heidelberg scored three goals within the first 37 minutes of the match to set up the win, before the Magic was able to pull a consolation goal back late in the game.