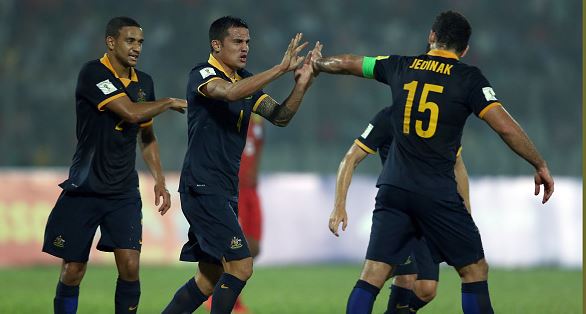 Australia has taken another step towards the 2018 World Cup with a comfortable 4-0 defeat of Bangladesh in Dhaka.

A hattrick from Tim Cahill and a goal for Mile Jedinak were the fruits of a powerful first half that saw the Socceroos ahead by four at halftime, only to fizzle out a little in the second half.

But the result still took Australia to the top of Group B, with Jordan going down 1-0 to Kyrgystan in the other match in the group.

Only three minutes had passed when Aaron Mooy swept in a freekick which so befuddled the home defenders that Cahill was left marooned in the box, able to apply a delicate flick and open the scoring.

Just past the half hour Josh Risdon's cross found Cahill in the box. The striker still had three defenders and the goalkeeper around him but managed to juggle the ball between them all and force it over the line.

Three minutes later Cahill had his hattrick – Burns was released down the left of the box, and his low cross was toe-poked in by the marauding Cahill.

Captain Mile Jedinak was the next on the scoresheet; Mooy’s deep freekick was headed back across goal by Bailey Wright, and Jedinak stooped at the far post to score an easy headed goal to make it 4-0.