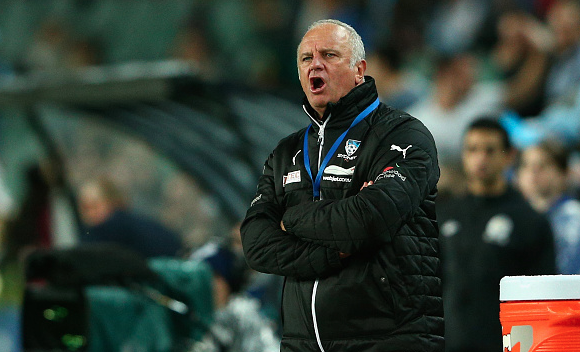 Sydney led 1-0 and also 2-1, with the Victory equalising twice, before going on to record a two goal win.

The Sky Blues dominated much of the second half, but were unable to find a second half goal, hitting the post on two occasions.

“The big moments decided the game. I thought overall the two sides were equal,” Arnold said after the match.

“At 2-2 we hit the post twice in one phase with [Shane] Smeltz and [Matt] Jurman.

“They go down the other end, [Gui] Finkler has a shot, it’s going about 10 metres wide, cops a deflection and falls straight at the feet of [Kosta] Barbarouses and he scores.

“Those things happen in football. That’s what happened tonight but overall I thought our performance was very good. Our purpose going forward was much more of what I expected.

“I told the boys [after the game] if they keep playing like that you won’t lose too many [games].

“It was a very positive performance. I thought it was a good spectacle, the crowd that turned up got a good game, there were plenty of goals and now hopefully there will be no more ‘boring, boring Sydney’.

“Like last year and all the other years, we get better and better as the season goes.