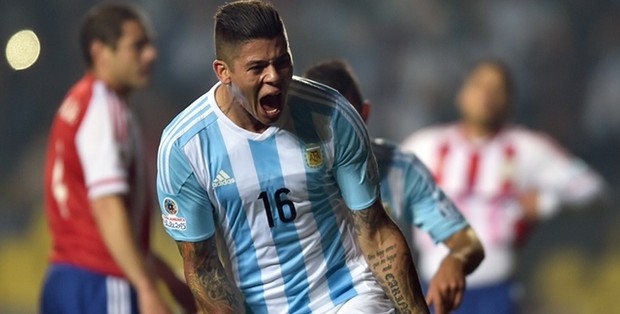 Argentina will head into Sunday's Copa America final against Chile as red hot favourties after a 6-1 rout of Paraguay in the semi-final on Wednesday.

Argentina dominated from the outset, scoring twice inside the first half an hour to set up the win.

Lionel Messi was superb as he set up both first goals half for Argentina, with Marcos Rojo scoring the first in the 15th minute.

Rojo found himself on the end of a Messi set piece, and he pushed the ball home as he fell to the ground under pressure.

Javier Pastore then doubled the lead just 12 minutes later, as Messi picked out Pastore's perfectly timed run and the PSG striker found the bottom corner of the net.

Paraguay worked hard to fight their way back into the match and were able to peg a goal back just before half time through Lucas Barrios.

Bruno Valdez was able to intercept an Argentina clearance, and headed towards Barrios, who took full advantage of his chance, making it 2-1 at halftime to give his side a glimmer of hope.

However, Paraguay's hopes were quickly dashed, as Angel Di Maria scored two goals in six minutes at the beginning of the second half to put the result beyond doubt.

Di Maria received a superb pass from Pastore, who allowed the Manchester United play maker to slide through the Paraguay defence and bury the ball into the bottom right hand corner. Di maria's second come slightly more fortuitously, as he buried a rebound after Pastore was denied by goalkeeper Justo Villar.

Ten minutes from time Sergio Aguero joined in on the fun, adding a fifth with a well placed header, before Higuain scored a sixth in the 83rd minute, once again via a Messi assist, to send an emphatic warning the the awaiting Chilean side.

If Messi can repeat his outstanding man of the match performance, Argentina may well be on track to end a 22 year major trophy drought come Sunday.